On April 8, Global San Diego had a booth the Harmony in Action Fair in Balboa Park. https://worldviewproject.org/harmony-in-action/

Global San Diego recently celebrated our launch with events hosted by The United Nations Association of San Diego and the San Diego Diplomacy Council. A great big San Diego thank you to our hosts and everyone who attended! 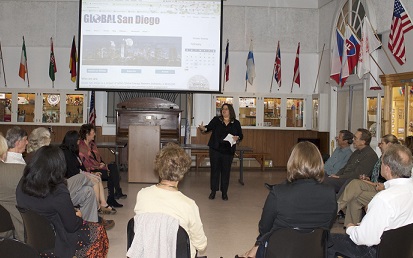 Global San Diego is sponsored and supported by six major nonprofits and is being housed by one of them, The Global Energy Network Institute (GENI), at its World Resources Simulation Center (SimCenter) located on the ground floor of the Westgate Hotel in downtown San Diego.  GENI also is providing personnel to help develop the project in the form of student interns, contractors, and volunteers. Read more about Bringing Global San Diego to Life

On Tuesday, April 21, 2015, National Geographic premiered a documentary film highlighting San Diego as one of the most innovative and forward-thinking regions on the planet to a lively audience that packed the theater at Copely Symphony Hall.  The evening’s events were hosted by Joe Terzi, the CEO of the San Diego Tourism Authority who put together a coalition of 24 major supporters to raise the funding required to produce the documentary. Read more about Spotlighting San Diego